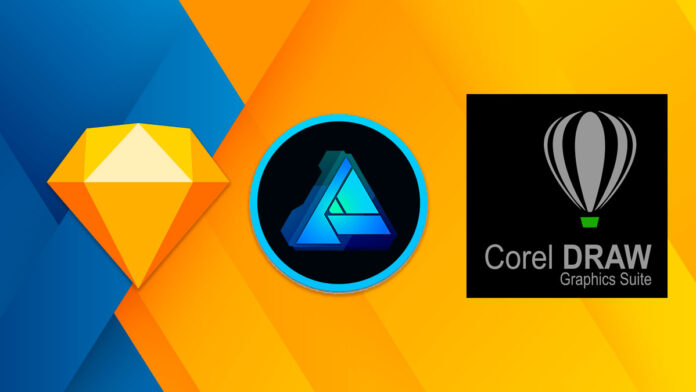 Adobe software may be the industry standard, but there are Illustrator alternatives available. Why is Adobe’s vector graphics editor so popular? Well, Illustrator was first released in 1987 and has dominated digital art, illustration, and graphic design for several decades. There are many benefits of using the software, you can get more information through our post of Download Illustrator .

However, as part of Adobe’s Creative Cloud, to use Illustrator, you will need a monthly subscription, either for the application itself or for the Creative Cloud suite as a whole.

If that’s a red line for you, then don’t worry. Instead, there are a number of decent Illustrator alternatives to consider, which are either free or available for a one-time fee. In this article, we’ve rounded up six of the best, explain what the differences are, and outline which ones will best suit your needs.

If you’re looking for more creative tools, you can check out our best iPad apps for designers, as well as these Photoshop alternatives.

These are the best illustrator-like apps in 2020

In our opinion, the best comprehensive alternative to Illustrator is Affinity Designer . First released in 2014, this vector editor from British software company Serif has gradually grown in popularity and influence, and for good reason. Not only is it powerful and feature-rich, its one-time purchase price (£ 48.99, but discounts are sometimes available) is much cheaper than getting an Illustrator subscription.

Without the legacy code, the software generally runs a bit faster than Illustrator, and if you have a relatively new Mac, much faster (which is largely why it won an Apple Design Award). But can it do everything Illustrator can? Although there are some loopholes, which we detailed in our review of, the answer is: generally yes. And working with other designers using Illustrator isn’t usually a problem either, as Affinity Designer can import and export AI and PSD files.

Affinity Designer can also boast some unique features that Illustrator doesn’t have, including the ability to switch between raster and vector workspaces within the same tool, a million more zooms, and unlimited redo. And although Illustrator is not yet available on iPad (though it is coming soon, and looks great ), you can now use the full version of Affinity Designer on iPad (for £ 19.99), with features optimized for the Apple Pencil.

If your need for a vector drawing program is primarily for digital design, then Sketch is probably your best Illustrator alternative – as long as you’re using a Mac. First released in 2010, Sketch has a strong focus on user interface and icon design that quickly led to it becoming the prototype for apps and sites. industry website.

It is not a completely complete drawing program, with all the features offered by Illustrator, so you would not use it to create complex illustrations or illustrations. But, in the same way, this means that it has a simpler and more user-friendly interface that makes icon and UI design quick and easy.

A Sketch license costs $ 99 and will give you one year of free updates. Once your license has expired, you can use the app for as long as you like, but you will need to renew it if you want the latest updates.

First released in 1989, CorelDRAW is a vector drawing program with a large following among artists and illustrators. For most of this time, it was Windows-only, but a Mac version finally came out this spring.

There is no easy way to tell if CorelDRAW or Illustrator is the “better” tool. Both are packed with features and both have their passionate advocates. Because the interfaces and approaches are quite different, fans of each tool will argue, just as vehemently, that theirs is the easiest to use, but there is no real objective way to solve this.

The objective fact is that Illustrator is the standard software for the design and illustration industry, but with that said, you can easily import and export AI and PDF files to CorelDRAW. The two tools cannot be easily separated by price either. CorelDRAW is available for a one-time fee, but the initial cost is relatively high – £ 599 at the time of writing. So you would have to use it for several years to make it cheaper overall than an Adobe Illustrator subscription. Alternatively, you can subscribe to CorelDRAW for £ 16.67 per month, billed annually, which is only slightly cheaper than an Adobe Illustrator subscription.

Essentially, then, the main reason to buy Corel Draw over Illustrator seems to be if you prefer the interface and the workflow. So if you’ve never used it, you might want to take advantage of the free trial and see how it feels in practice.

Gravit Designer is a tool that allows you to work on a wide range of design tasks, including illustration, user interface and screen design, graphic design, and logo design. It has many Illustrator-like features, including a freehand drawing tool that smooths out paths as you draw, the ability to create custom shapes, and the equivalent of the Pen tool.

Gravit Designer is available online in your browser or on your desktop as a downloadable application for Mac OS, Windows, Linux, or Chrome OS. The tool supports a number of vector and raster file formats, including AI and Sketch files. Save your work to your computer in .gvdesign format, and you can export it as SVG, POS, PNG, or JPEG files.

Gravit Designer operates on a freemium model, so while the free version is quite capable, you have to pay for a Pro subscription (£ 75 a year at full price) to get unlimited cloud storage and features like PDF export by over 150 dpi, CMYK color spacing, version history, and the ability to work offline.

Inkscape natively supports opening or importing a variety of formats, including SVG, PDF, EPS, AI (Adobe Illustrator), and CDR (CorelDraw). Besides Windows and Mac, it will also run on Linux. The main drawback lies in its performance: it can be quite slow and slow at times. But for a student or beginner who wants to create digital illustrations and vector graphics for free, and who does not want to spend money, it is a great option.

Vectr is a totally free browser-based tool that offers a quick and easy way to get started with vector editing through an intuitive interface. Because it’s web browser-based, anyone with an internet connection can use it, and that makes it pretty easy for multiple people to collaborate on a design as well. Each image has a custom URL that you can share with others, and you can export your finished work as an SVG, PNG, or JPEG file.

In general, Vectr is super simple, which can be seen as positive or negative. In other words, it will never replace the feature-rich capabilities of Illustrator, Affinity Designer, or Corel Draw, but that also means a very low learning curve (there are very good tutorials in the app). So if you are a newbie looking to create, for example, a social media graphic with the minimum of time and effort, this is a great option.